We are not currently accepting Forest Health grant applications.

The Forest Health Program offers assistance to landowners in the form of education and information on forest insects and diseases and ways of managing them. There is a small amount of cost-share funding available to help treat your forest for these insect and diseases.

Nevada’s forests are host to several common pests which plague western forests. Widespread stress to the trees, brought on by drought conditions, weaken individual trees creating favorable conditions for the pests. Drought conditions in the early 1990s opened up whole stands of trees in the Carson range to the destructive effects of bark beetle infestation. Dwarf-mistletoe is widespread across the state and infects several different species, including Pinyon pine. Many other pests are attacking Nevada forests.

Are you a victim of Insects and Disease on your Nevada Forest? Funding is given to the Nevada Division of Forestry from the U.S. Forest Service to provide technical assistance and to help Nevada's landowners improve the health of their forests on the ground.

The White Satin Moth or Satin Moth (Leucoma salicis) is a moth of the Lymantriidae family. It is usually found in Europe and has been identified in Western Nevada. The wingspan is 37–50 mm. The moth flies from June to August and the larvae feed on Salix and Populus species.

The Pinyon Ips Beetle belongs to a group of bark beetles called Ips, or engraver, beetles. It is a native insect in Nevada’s woodlands and is typically present in low numbers. As with many forest insects often considered as “pests,” it plays an important role in the ecosystem.

The Jeffrey Pine Beetle is the most serious insect pest of Jeffrey pine. The beetle attacks only Jeffrey pine and occurs in the Sierra Nevada wherever this tree species is present. The beetle is typically present in relatively low numbers (endemic) in any given area, and breeds in single slow growing trees of reduced vigor.

The Pine Engraver Beetle attacks many species of pine including Jeffrey and Ponderosa Pine, Lodgepole Pine and White Pines. Often found in downed trees and slash, this beetle prefers the smaller diameter trees and often kills the tops of pine trees predisposing these trees to other bark beetle attacks.

The Western Pine Beetle is a bark beetle which attacks and kills 6″ diameter and larger ponderosa pine in Nevada. In California, Coulter pine is also attacked by this aggressive beetle. Typically the beetle attacks trees weakened by drought, old age, overstocking, wind damage, fire or disease.

The Red Turpentine Beetle is a member of the bark beetle family found in pine forests throughout Nevada. It attacks all species of pines in the state, though is rarely a significant pest of any of them. The more commonly affected native pine species in Nevada are ponderosa, Jeffrey, sugar, lodgepole and western white pines.

Dwarf mistletoe are parasitic plants which infect all coniferous tree species in Nevada except incense cedar and junipers. However, these two species are infected by true mistletoes. There are 14 species of dwarf mistletoe which may infect the states…

Black Stain Root Disease (BSRD) is caused by a fungus that infects and kills several species of western conifers. The fungus does not decay infected wood, but instead kills the host tree by blocking water conduction to the foliage. The principal hosts are ponderosa pine, Jeffrey pine, and pinyon pine. This disease has been found in relatively few locations throughout the Western United States in Idaho, Montana, Utah, Nevada and California.

Use the links below to access additional documents, geospatial data, web applications, and external websites related to the Forest Health Program.

The Nevada Forest Health Program is funded through grants from the US Forest Service.

In accordance with Federal law and U.S. Department of Agriculture policy, this institution is prohibited from discriminating on the basis of race, color, national origin, sex, age or disability. (Not all prohibited bases apply to all programs.) 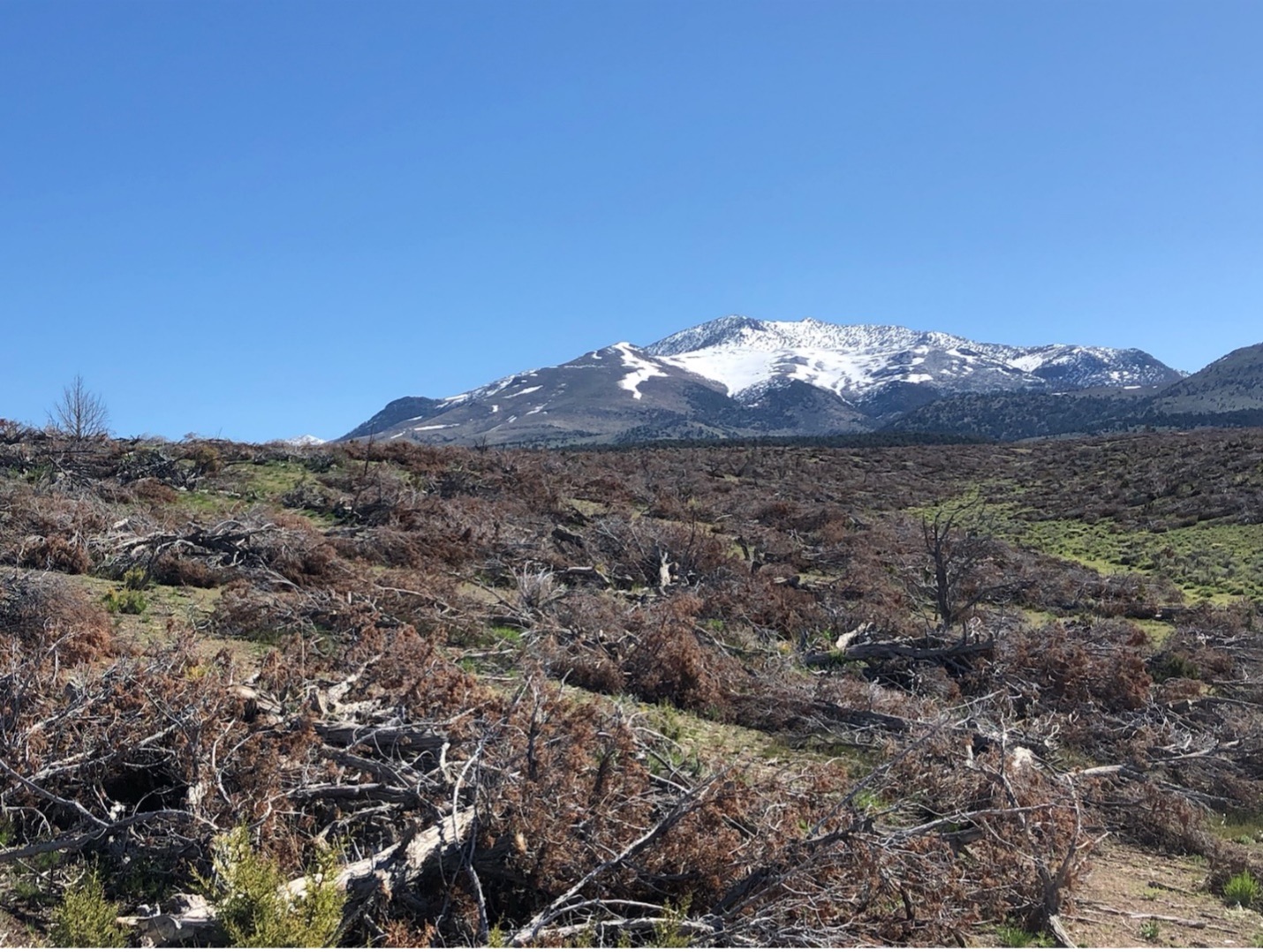 In partnership with the United States Forest Service, Conservation Crews from Wells and Carlin began work on the Ruby Lake Estates project in October of 2020. Located on the Southeast side of the Ruby Mountains...
Read more
View all projects